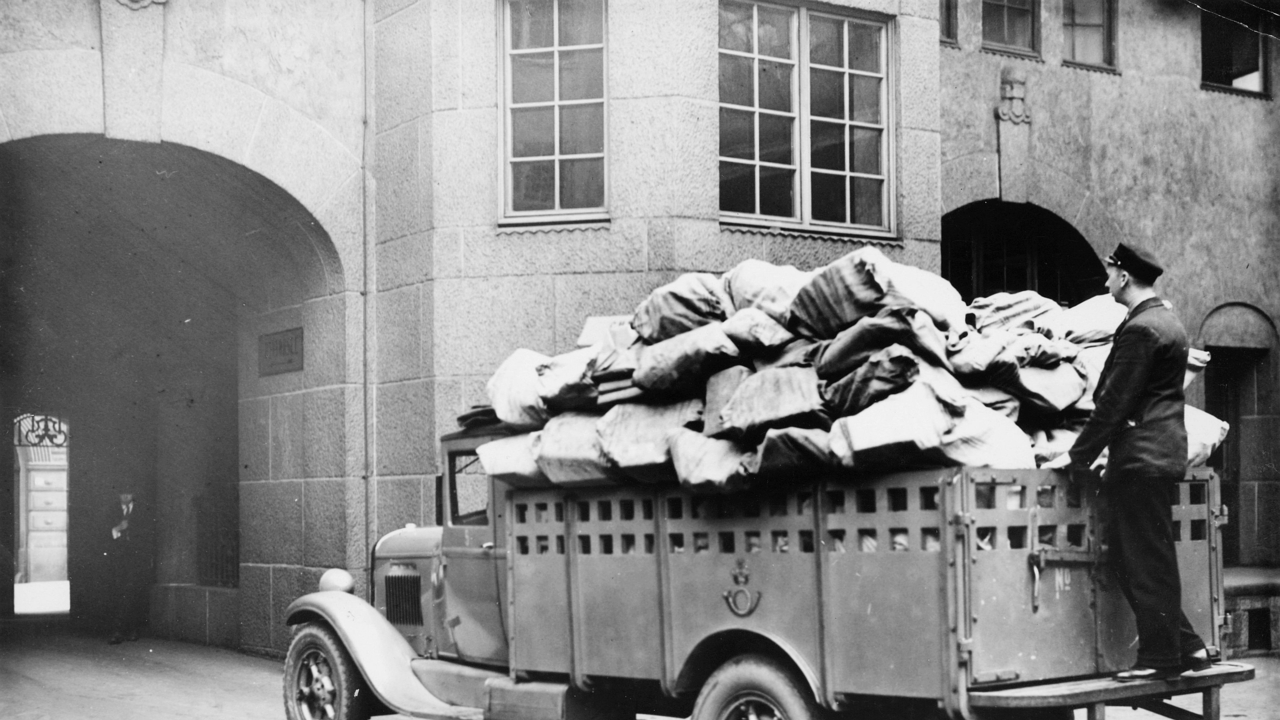 The early seventeenth century was a boom period for Norway. Trade and shipping flourished and prosperity grew. Hannibal Sehested was appointed Danish viceregent in Norway in 1642. He took a great interest in the progress and prosperity of the country and he therefore arranged for Norway to have its own postal administration similar to the one that had been in operation in Denmark since 1624.

The Norwegian postal administration was founded on 17 January 1647 and from that date Henrik Morian, originally from Holland, was given the sole right to run a regular postal service in return for an annual consideration. It was his duty to carry the King`s and the authorities mail free of charge, but he could charge a fee for other mail. This arrangement remained in force until 1719, when the postal service was taken over by the State, to be administered by a joint General Directorate of Post, for Norway and Denmark.

The first routes were set up from the capital city, then called Christiania, to Copenhagen, Bergen, Trondhjem and Christiansand. This mail was sent by land and in the inland areas was carried by so-called “post peasants”. They received no direct remuneration, but were exempt from military service and from the obligation to provide accommodation and transport for armed forces and officials. The mail took 8-11 days to reach Copenhagen and 5-7 days to reach Trondhjem and Bergen. From 1663 postal services were started in Northern Norway.

The liberation of Norway to Denmark in 1814 and its subsequent union with Sweden heralded a completely new era for the postal services. Christiania was no longer just a stop on the way to Copenhagen. This was where the Parliament met; this was where the government worked. In 1814, Norway had 25 post offices, 6 branch offices and 97 rural sub-offices.

The growth of the postal services in Norway is closely linked with the technical advance in means of communication. In 1827 two mail steamers, the S/S “Constitutionen” and the S/S “Prins Carl” were delivered from England and put into service.

The Railway comes to Norway and Norway`s first Postage Stamp

Steamships revolutionized postal deliveries along the coast and trains did the same for the inland services. On 1 September 1854, the first train stood ready at the Main station for its maiden trip from Christiania to Eidsvold. As the railway network was extended, its importance for the postal services and for parsel deliveries grew. Ambulant post offices were set up on the train and here the post was sorted and distributed en route.

Britain implemented a major postal reform in 1840 with the introduction of a uniform postal rate and prepayment with postage stamps. Other countries followed suit and Norway`s first stamp was issued in 1855.

As the nineteenth century advanced, the postal services grew more and more important for international trade and communication.

Motorized Vehicles take over and the Mail Takes to the Air

By 1923 the volume of mail sent by van had reached 29 % and by 1937 the figure was 80%, while horse-drawn transport had fallen to 7 %. The first official airmail route was opened in Norway on 12 July 1920 on the Horten-Kristiania-Arendal-Kristiansand run.

The post peasants and the mail carriers had always used horses and carriages, but this became an item of considerable expense for the Postal Administration. With the advent of trains, vehicles and boats, the days of the post peasants were numbered.

The post office extended its services: in 1943 post giro was introduced and a postal savings bank in 1950. By 1968 the volume of letter post had doubled over a period of 20 years. The need to sort post with machines arose and the postal code system was introduced.

New methods of organisation were introduced during the last half of the 1900s. Norway Post changed from a public service enterprise to a marketing company. In 1996 Norway Post became a state owned company with limited liability: “Posten Norge BA”. Later, in 2002 the Norwegian parliament (the Storting) changed Norway Post into a limited company “Posten Norge AS”. During 2012, Norway Post changed 149 post offices to the “Post in Shop” concept, following a go-ahead from the Storting. This change has meant that 30 Post offices remain in Norway, whilst the number of “Post in Shop” outlets ,has increased to approximately 1400.